Persian cats are the most popular cat breeds in the world!   They are considered regal, sophisticated, relaxed personalities, yet playful, alert and sweet.   Best of all these Persian cats have gorgeous, long, silky free flowing coats of luxurious fur.

They are one of the most striking cat breeds of all time.

The Persian cat breed expresses themselves in many colors and patterns with their coats. The most highly sought after is the Silver Chinchilla Persian.  The lighter Chinchillas are often mistaken for a white Persian, as they sometimes look completely pure white.
However, their eyes, mouth and nose are all outlined in black as if they have makeup on, instead of pink.

The CFA Silver Division Persians have several distinct characteristics that are all within the registry standard defined for all Silvers and the Silver Chinchilla Persians.

>   Silver Chinchilla Persians have green, emerald, turquoise, or blue-green eyes
>    Eye rims, nose and lips of these cats are outlined in either black or blue, according to the coat color
>    Chinchilla Persians all have a lighter undercoat color, and the ends of the fur are tipped in either black or blue, or not all
>    Chinchillas typically have a doll face look, then the traditional flat ("Peek-faced") profile you see in other Persian cats. You may      even Silver Chinchillas have a fairly flat; as in genetics they do continually appear


More about the Silver and Chinchilla Persian Cat

No matter the color pattern or the intensity of the tipping, the Persians in the CFA Silver Persian Division, show characteristics of silver or black tipping on the coat to almost no tipping at all !

This varies with each Persian cat as the silver tipping gives the Silver and Silver Chinchilla Persians a shimmering look to their coats that gives them the appearance of royalty, elegance, and uniqueness, yet each individual is uniquely themselves

the Silver and Golden Division - yet there are many unique colors then what we have been discussing,

Very rare, however, may occur -  the Silver-Golden Persian division the Persians is smaller then other Persians,

Documented with Federal Licensed Vets that are amazed with their size,

In 2016 our Vet stated; "our Persians are the healthiest cattery cats she has ever seen"

This is quite an impressive acknowledgement 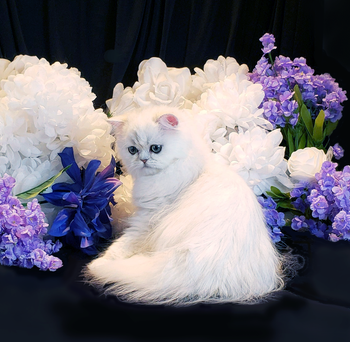 >  Chinchilla silver Persian kittens are beautiful silky coats that appear to sparkle due to a dominant gene inhibiting the production of color at the base of the hair shaft leaving a faint silver color at the tip, a silver accent or silver tipping occurs

Chinchilla Silvers are often born dark, however, lighten as they mature  - upon reaching full maturity, chinchilla silvers can have these beautiful silver accents or tipping, or appear to be completely white

Chinchilla Silver Persian kittens may have emerald green. blue green, turquoise eyes that are large and round to teardrop shaped

however, with more of the shaft containing color tipping of silvers, black or silver and black

The shaded silver appears darker due to these accents, but the undercoat is snow white or white

Shaded silver Persian cats and kittens typically have green eyes and the same black outliner on the eyes, nose and the mouth as the

Chinchilla Persians pattern can come in many colors other then white and silver, such as, apricot, cream and gold, shades of gold

Nevertheless, Persians of all patterns (colors) are groomed daily with a metal comb a sterile face wash, specifically formulated shampoos and rinses for the Persian cat . . .  giving them a luxurious, silky free flowing coat !

calling back wanting another darling, tiny Persian kitten choosing from several of coat colors and patterns the CFA Silver Persian Division produces, such as;  many dark shades to the highly sought after Silver Chinchilla that possesses a snow white undercoat​