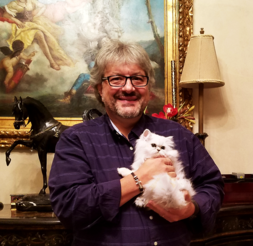 Would this very young and tiny Persian do well

with a big, big Ragdoll Cat ?

​Immediately, " Cowboy " the RagDoll protected him,

You would find them situated on the cat tower

or the window sill to look out at the world !

Wherever, Cowboy was there was was" Dustball " !

Both soon were inseparable !

Debbie,  Thank you for the pictures – as usual, they’re adorable!  – he is a TOOOOOT!

The most adorable and loveable pet that I have ever had !

He is ALWAYS at my side and wants me to hold him or play with him ALLLLL the time – at this very moment, he is sitting with me on my chest, purring sooo loudly, and rubbing up against my cheeks

I think she would have 15 if she could,  ANNNNND one of your Arabians !
THANKS AGAIN ! ! !  I truly hope you know how much this means to us !
Chris 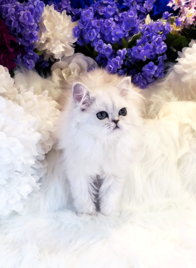 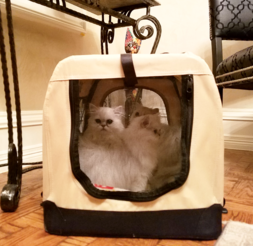 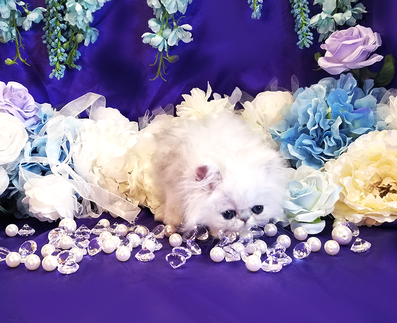 are all pal-ing around and playing together

Tiger will chase both of them – it’s hilarious because he is sooooooooooooo tiny !

They just play along and allow him to be Mr. Big Stuff

Had the cutest face, very tiny and loved to play with his siblings . . .

today he is known to be the "welcoming Committee"

for any new Persian that arrives to Trish and Chris's home​

Tiger was renamed " Butchball " nicknamed; " Butchie " by their grandchildren 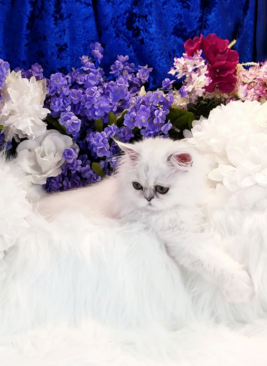 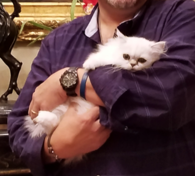 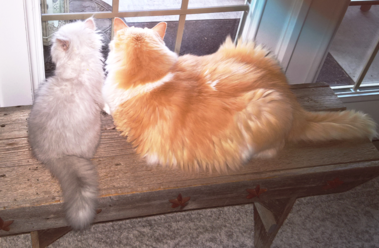 WOW!  I cannot believe it has only been about 40 days

(2 other TinyPersians and our 2 Ragdolls)

and quickly adapting to the others and claiming their place

Romeo (Noah) was the most affectionate from the very start and

but the others love it and fight back just like brothers love to do . . .

Rico is 99.9% of the time the instigator

and one half of the Dining Room table

He and ButchieBall are best buddies and play quite a bit . . .

which is cute, because they are the two flat faced cuties and really do look so much alike

Plus, Rocco'slittle purr-box is non-stop and he LOVES being petted

Our house is now ALIVE !

we sit, talk, read, eat, exercise, and even try to sleep

or the pull string from one of the shades

and forgot to put out of his reach (what a toot ! )

YESSSS!  They ARE very time consuming (7 cats) but worth every second of it !

You have, once again, given us so much joy and happiness

First it was our precious little DustBall

Then my best of all little friend in the whole world, little ButchieBall

Now we have all 5 (TinyPersians) of them, along with our original two Ragdolls

I would own a cat (one of them), I would look them in the eye and tell them they were CRAZY !

I told you in the beginning " What a blessing our very first Tiny Persian Dustball was to us ! " ,

it just got better with ButchieBall

Well, now adding Romeo, Rico, & Rocco and our happiness and joyfulness is unimaginable

and ButchieBall or DustBall pops up into my chair . . .  It just brings a smile to my face

you already know and have experienced this for a very long time !

Once again, THANK YOU for making all of this possible for us –

so much joy and happiness !

You and Steve truly are special people and deserve so much !

You and Steve are unforgettable !

P.S.  We hope that the two of you enjoy the pictures.  Sorry for so many but it’s been so long and we are trying to catch up.  Some of them were in the MotorHome – they loved it!

Hello Debbie,
We just got home from taking the new babies to the Vet  – Everything was A-OK as expected
Butchie and DustBall have not yet even seen them but they sit outside the door and

wimper hoping to get in to meet their new housemates

they, ALL of them, truly make our days, every day, so much better and brighter
Thank You,    Chris 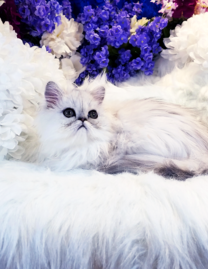 It has been customary for us to name The stories after a pet that has been purchased from TinyPersians, however, Chris and Trish have purchased 5 lovely Persian from us and that would be one long title !

Hi Debbie,
This is Trish (of Trish and Chris),

I have set out to write this note numerous times

and just can’t seem to make the words meaningful enough
You will just never understand how thankful we both are for the two little blessings you made possible for Chris and I to have in our lives. ( DustBall and ButchieBall )
These kittens have made us so happy and filled such a void in our lives

that we didn’t even realize we had!

You have done such a remarkable job with your breeding program

that have ever been produced

Your total attention to every detail in your breeding process is more than obvious
These are absolutely the healthiest and most beautiful kittens I have ever seen, and it’s definitely because of you and Steve and your strict guidelines and tireless care
There just aren’t words to thank you enough for giving us the opportunity to witness and enjoy God’s perfection in these Tiny Persian kittens
Your baby kittens are second to none

Absolute perfection in every way

Thank you from the bottom of our hearts

You and Steve will never, ever be forgotten
Much love, Trish

we cannot thank you and Steve enough !
He is eating good and drinking plenty of water   Thank You,  Chris 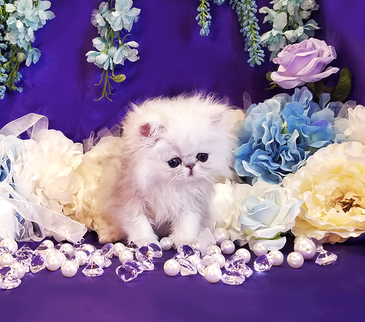