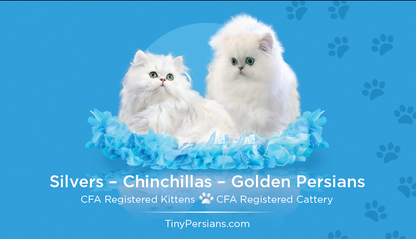 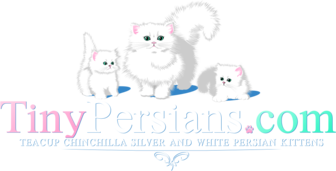 Our customers say; "I found your silver Persians the best out there!

I have searched and research Persians and your Persian cats are so much more beautiful then other cattery websites!"

Most colors are shades of silver and very white looking Persian long hair coats.   So if you want a very light colored Persian, choose from our shades of Silver, Silver Chinchillas (white looking cats) , Silver Shaded, Goldens, Golden Shaded Persians. Stunning, rare - beautiful Chinchilla Cats.
Sometimes there is a wait, but it is worth it to have a Persian kitten from a reputable CFA Silver Persian Division breeder.

Toy Persians are little larger than the Teacup Persians.

They are still very small Persians.

are small kittens weighing between 3 pounds and 8 pounds.

Females average weight between 4 to 6 pounds

Males average weight between 5 to 8 pounds

are small Persian kittens larger than a teacup

and smaller than a Standard Persian.

There are other characteristics to the Persian that is evaluated in pricing individuals.