Breeding the best to the best! 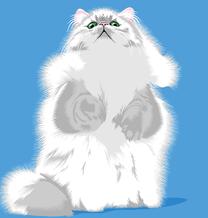 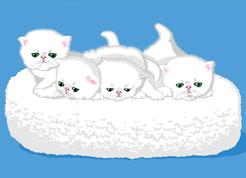 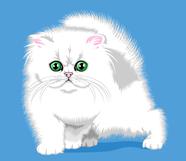 sometimes have eyes of different colors

Sometimes you will find Persian Cats having odd eyes.  That is one eye green, one blue, or one blue and one gold.

I find these cats absolutely gorgeous!   In some instances they are in high demand. 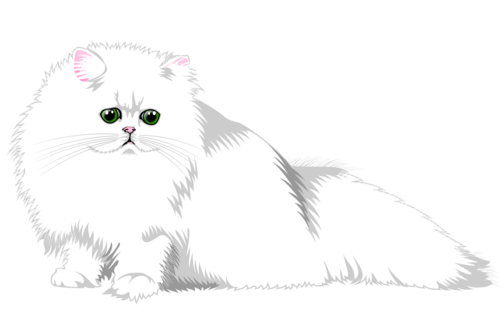 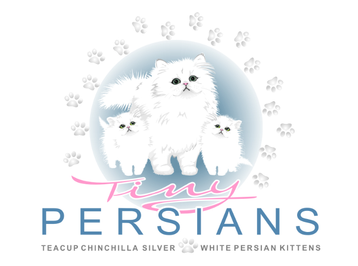 logos, art illustrations and/or art renderings that are produced, owned and copyrighted by TinyPersians.com will be in violations of the U.S. Copyright Laws and will be prosecuted therefore under the current statutes.  WARNING! 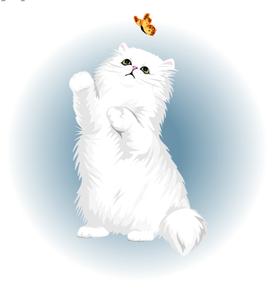 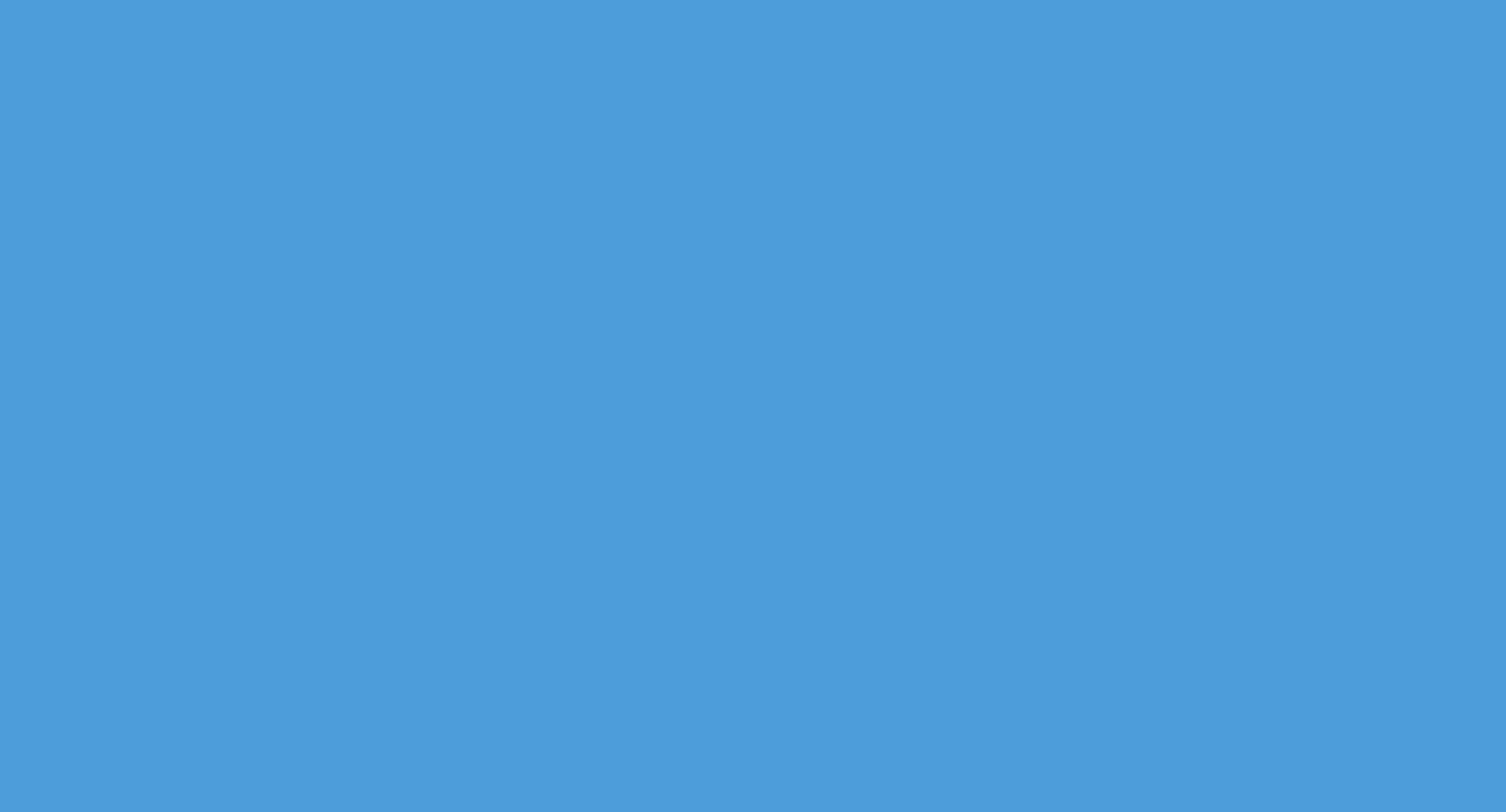 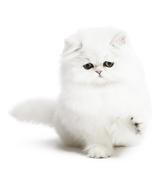 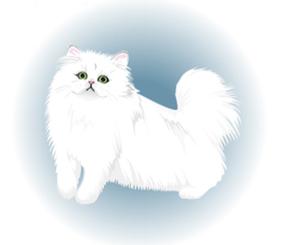 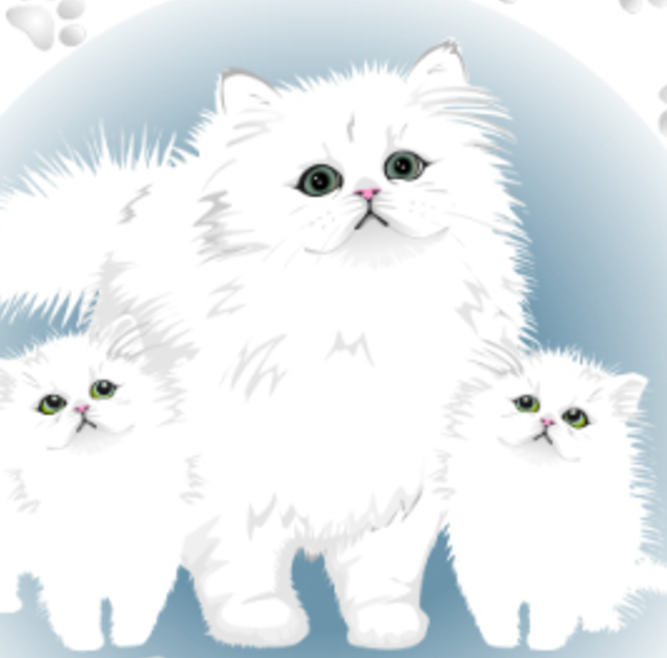 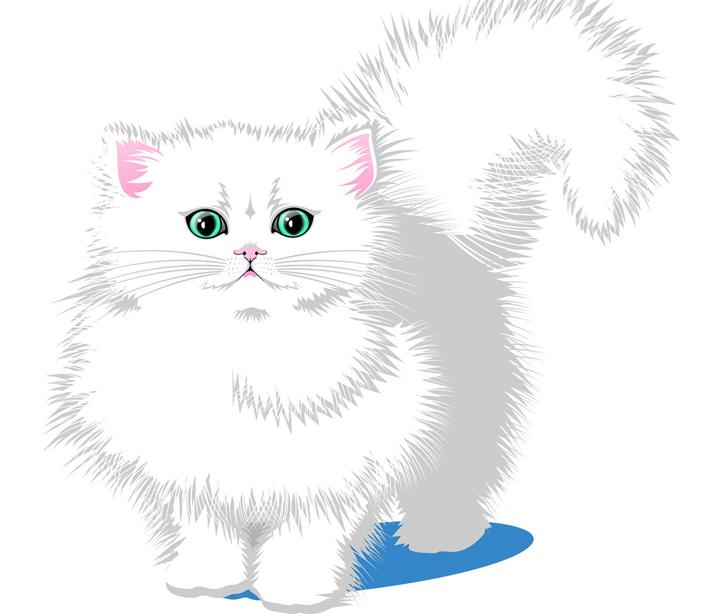 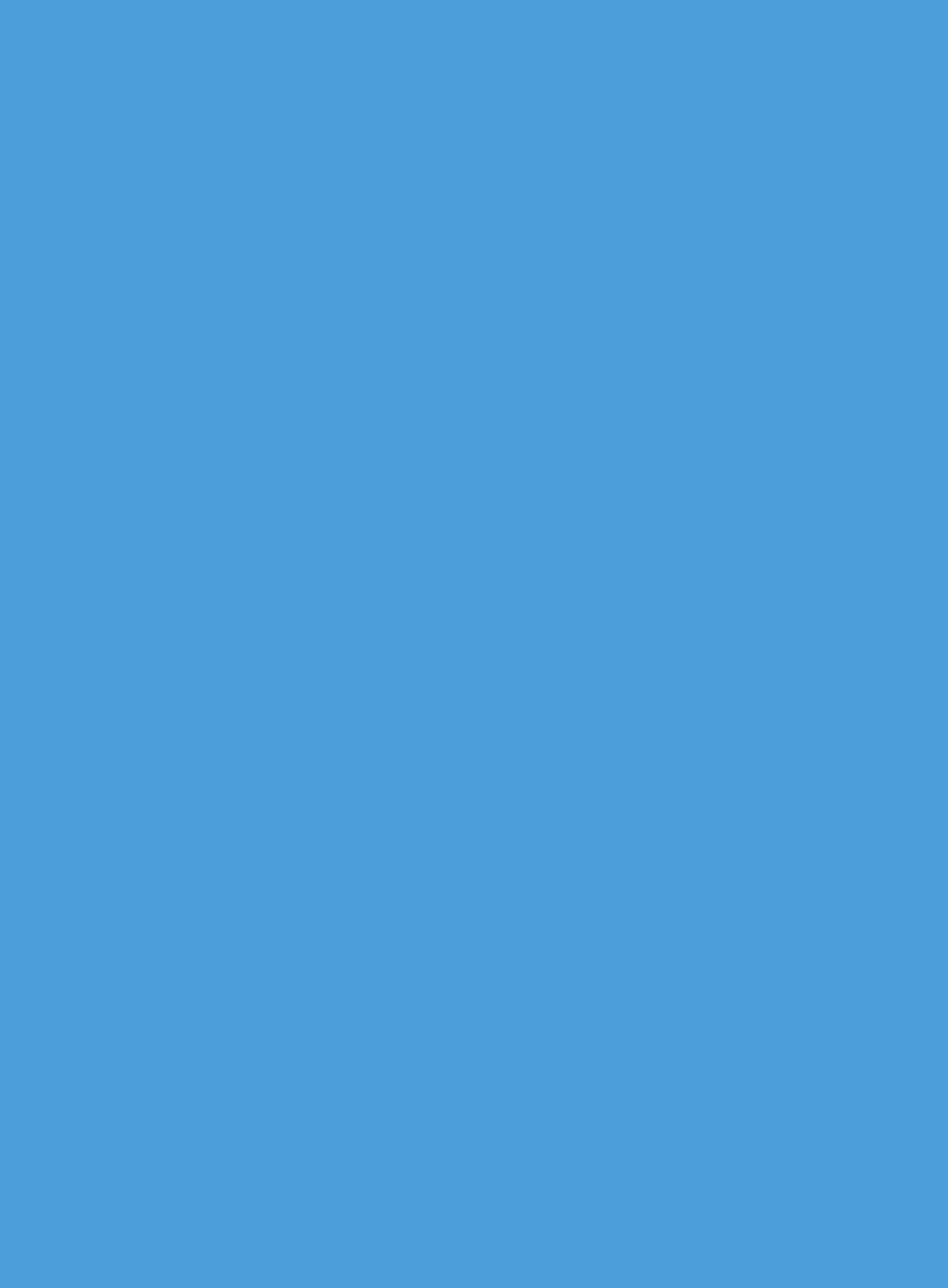 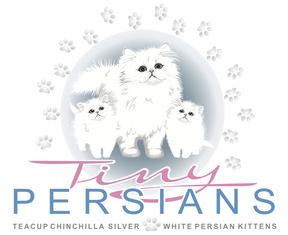 Discover the origin of the Persian Cat !

The Persian cat is the most popular cat breed today in the U.S, possessing an exotic and majestic appearance!  Its unique characteristics makes it one of the most highly sought after and desirable cat breeds of today.  Persians are well known for their sweet, gentle and laid back personalities, gorgeous coats and their expressive eyes.   Having a luxurious, long, silky doubled layered coat, gives the Persian a regal appearance and know for a character that can tolerate most everything due to its quiet nature.

If irritated, it will merely walk off as if not bothered.  They are known to live long lives and get very attached and loyal to their owners.  More about the Persian cats personality.

Origin of the Persian

The Persian is one of the oldest breeds of cats, with records of its presence dating back to the times of Pharaohs in Egypt.   It is said that the ancestry of the Persian Cat originated in the middle east in the country Persia, now called Iran. Therefore, it is the belief that the Persian originated in Persia and brought over to Europe centuries ago, by the Phoenicians and Romans in the 1500's and considered highly valued items of trade.  The first documented ancestors of the Persian cats were imported from Persia into Italy in 1620 by Pietro della Valle, and from Turkey into France by Nicholas-Claude Fabri de Peiresc at around the same time. From France they soon reached Britain.  The Europeans were impressed with the Persians long, silky coat, which they continued perpetuating this highly sought after trait.  It was believed the longhaired Angora cats from Turkey were introduced to the breed and with references to such cats dating back to 1684 B.C.

Yet, today it is considered that the actual lineage of the Persian cat will probably never be known, experts do agree that the long haired cats, including the Persian was a result of a genetic mutation.  Most likely the longhair variety of cats were probably the result of mating between the European Wild Cat and Palla's Cat also, know as the seppe Cat and resulting in a mutation in the coat length and was considered the ancestors of today's Persians or Angoras (these names were essentially interchangeable).

With tails and claims of the Persian cat decending from the Sand cat, or the Angoras crossed bred with Chinese longhairs or Russian longhairs, to the myth of longhairs came to China as a gift from the king of Persian, all to date, still cannot be substantiated.

It was not until the later half of the nineteenth century that their fame truly began to spread.  In the United Kingdom they were called Persian Longhairs or simply Longhairs cats.  With selective breeding, the Persian cat of today was created.

What we do know is the Persian cat is now considered the most popular cat breed in the US.  The valued traits consist of the Persians coat thick, shinny, a sweet and less active than most cats, particularly suitable for apartments or small homes.  Basically not requiring much room.  The Persian enjoys snoozing the majority of the day, its laid back, sweet nature makes this cat a good choice for families with children.  Persian cats are very loyal to their masters and love to stay close to them - less likely to stray like other cat breeds.

The Doll Face Persian kitten looks like a fluff ball of fur, with a sturdy, muscular, cobby body.  The tail is thick and short and in proportion to the body, angled down, lower in the back.  Legs and tails are short, yet in proportion to the body structure.  The Doll Face Persian's have small rounded ears set low on the head.  It's head is large, round and massive with round eyes set far apart, full cheeks and a full, well developed chin, yet the nose is snub, placed lower on the face.  An up-curving mouth gives an expression of happiness, almost smiling. The coat is very long, silky, dense and flowing.  The Persian comes in various colors.  Adult males 9-14 pounds and females 7 to 11 pounds with the exception of the popular teacup persians that are much smaller ranging from 5 to 7 pounds for females and 6 to 8 pounds for males.  Doll Faced describes the type of face.

CFA - With the Cats Fanciers' Association the patterns of color with the Persian cat is separated into divisions, such as; Silver and Golden * Shaded * Smoke * Calico * Bi Color* Solid * Tabby* Particolor * Himalayan.  The most popular Persian Doll Face Persian is the Chinchilla Silver, Silver, Shaded Silver and White Persian kittens.  In the United States the most popular cat breed is the Persian Cat.

With TinyPersians.com specializing in the Sliver and Goldens, which includes Chinchillas, we will therefore, define this Persian color division, however, there are many colors of the Persians, as listed above.

* Silver and Shaded Persians consist of Chinchilla and Shaded Silvers, Goldens and Blue-Goldens. TinyPersians.com specializes in this division. The Exquisite slivers are considered the most ethereal of all Persians.  The Chinchilla is a sparkling white cat with black tipping scattered evenly like stardust and ever so lightly on the face, legs, tail and body.  Shaded Silver Persians show a mantle of black on the back, shaded evenly on the sides.  The tipping on the legs and face should match and is darker than the Chinchilla. Goldens are either Chinchilla or Shaded.  Their gorgeous color is rich, warm cream tipped with black.  Silvers and Goldens have a green or blue-green eyes rimmed with black, black paw pads and brick red or rose nose leather.  Now the Blue-Golden Persians have been accepted with CFA.  More about Silver Shaded Persians - see below.

At TinyPersians.com we specialize in Chinchilla Teacup Persians.  The exquisite Chinchillas are highly sought after.   The Chinchilla Persian is defined as a variety of the Persian cat, classified as a "silver" cat. Chinchillas today have a quiet, gentle nature.  The Chinchilla undercoat should be pure white, the coat on the back, legs, flanks, head, ears and tail being tipped with black.  This tipping is evenly distributed, gives a sparkling appearance.  The face and legs may be very slightly shaded tipping, however, the chin, ear tufts, stomach and chest must be pure white. Ideally the hocks should be unblemished.  The eyes are large, round and outlined with black eyeliner, color emerald green or blue-green in color.  The nose leather - brick red, outlined with penciling of black.  The pads black.

Chinchilla Persian personalities are generally very quiet, placid in nature, love to lie around the home more as a decorative ornament!  They are affectionate, enjoy attention and can be quite attached and loyal to their master.  More about Chinchillas - see below.

Here at TinyPersians.com we offer the best of everything.  With the Chinchilla and White persians high demand, we are proud to announce that we offer Teacup Doll Faced Chinchilla Silvers, Silvers and Whites. Choose from Teacup to Toy Persians, all carefully bred to produce gorgeous, health Tiny Persians.  Take home or reserve your Tiny Doll Faced Persian kitten today!

There is much talk about the type of face a persian might have, such as, from the doll face,

to the "extreme, ultra, flat faced" (snubby) face as seen in todays show arenas.  A responsible breeders should always (as in any animal breed) breed for the best interest of the animal.  Recently, with Persians

Additionally, responsible Persian breeding is testing animal breeding stock for genetic defects, and not breeding any infected bloodstock, making sure they have a clean bill of health. Additionally, vaccinating, worming and providing healthy offspring.  Most often it is safe to acquire a Persian from a small responsible breeder and one should avoid pet stores or large catteries that may not have controlled health environments for producing and maintaining healthy cats.  In addition, larger catteries it is hard to control health breakouts and some catteries have genetically defective breeding stock.  There are exceptions to rules, however, a word to the wise.  Years ago, a friend of mine purchased a very expensive persian with an under bite, that was the beginning to the end for years for this breeder. We welcome your inquiries and wish happy results when finding your new teacup persian kitten.

At TinyPersians.com we are a PKD Negative Cattery, therefore, our kittens

bloodlines have been tested and considered negative for PKD to insure healthy offspring.

.   PDK references a defective gene (PDK1 gene) that causes Feline Kidney Disease.  Responsible Catteries test their breeding stock with a DNA test.   Both parents must be negative in order for the offspring kittens not to carry this PDK gene.